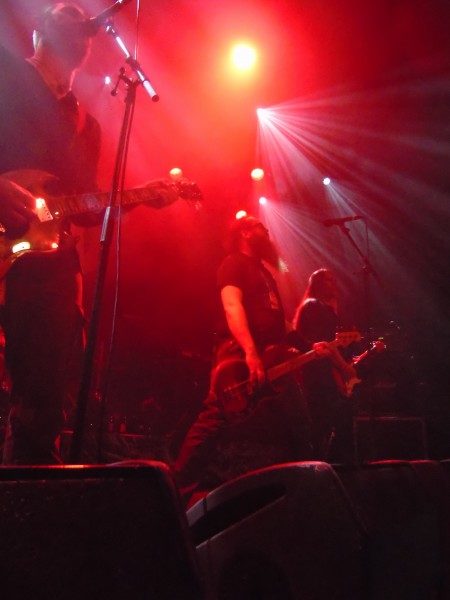 Quite a nice package of folk and pagan metal from Scandinavia. On a Friday night in Holland this package was rewarded with quite a big turnout, right from the beginning.

Skálmold
One of the things I like about folk metal and the styles close by, like Viking and pagan metal, is that the music is often very well thought through and yet there is plenty of room to have fun. Icelandic Skálmold understands this very well. With three songs from their current and excellent album Vögguvísur Yggdrasils the band knows how to please the crowd. It was obvious that the band enjoyed themselves and so did the crowd. Ultimate song Kvaðning left everyone with a big smile on his face.
Rating: 8/10

Moonsorrow
Really a double headliner on this tour, playing an hour and a half. That’s rather convenient when you play long songs like Finish Moonsorrow. Definitely the most serious band of the evening. That doesn’t mean the band were looking miserable all the time. On the contrary, it was clear that, just like Skálmold, Moonsorrow also enjoyed playing. In the audience lots of T-shirts of the band, making clear that a lot of people came to see the show especially for them. In fact multiple fans sang along. Either meaning they are Finnish, or that they truly made an effort to learn the lyrics. Very good show, combining trancelike stuff with more aggressive pagan stuff.
Rating: 8.5/10

Korpiklaani
Love them or hate them, I don’t care. When Korpiklaani is in good form, the whole place is one big party. And luckily they felt like doing a good show. For starters new song ‘A man with a plan’ set the mood quite nicely. Immediately the moshpit was on. Rather special was the fact that a guy in a wheelchair was the center of that pit. Raised by many helpers he got to shake hands with singer Jonne Järvelä. I am sure he had the time of his life. Encore Wodka was much appreciated, as always.
Rating 8.5/10

The entire evening the sound was pretty good. And not extremely loud. That was pleasant for once. Great package. Nice venue. Three bands on top of their game. Can’t ask for much more.