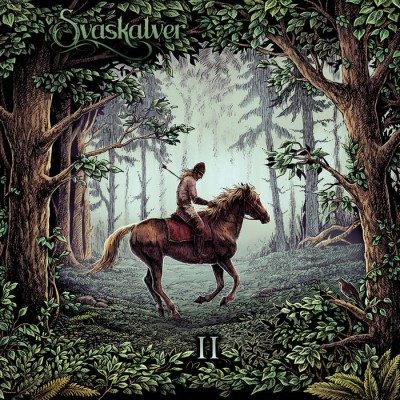 Whenever a new album comes out, it allows you to go back and re-listen to some of the previous material and chart the projects growth. Such is the case with the new album from Svaskalver entitled “II”, yes it is their 2nd album. Their first album “Чёрные Cказки” (“Dark Fairy Tales”) from 2014 was solid for sure and showed a very promising future.
“II” is that promise realized with a great 2nd album. Hailing from St. Petersburg, Russia (possibly the new capital on planet earth for folk metal) Svaskalver have a sound that sits in the middle of a few bands I feel…..Ensiferum, Varang Nord, Grai and Eluveitie all come to mind when listening. Blending harsh male and symphonic female vocals with folky riffs, keys and violin, Svaskalver have a pretty well rounded sound touching on numerous sub genres of folk metal. The album has 8 total tracks including two covers (“Everlasting Ward” by Finland’s Noumena and “ Король Oльхи” (“Alder King”) by Emerald Night) so 6 originals totaling up to about 33 minutes of music. The interplay between the guitar and folk instruments is one of the things they do the most successfully, switching between guitar and synth/violin defining the riff. When the guitar/bass/drum create the rhythm, the folk instruments take over to propel the song and vice versa. Let’s not forget the amazing vocals by Anastasia (also known of White Egregor) who really defines their sound most of all. Bringing power, conviction and edge to the female vocal has never sounded so effortless. Her interplay with guitarist/male vocalist Fjodor works really well, trading off to give the songs an additional point of interest. No really super up tempo songs here but they are certainly catchy and have a little bit of a power metal vibe to them at points but never straying too far away from the folk. I think Svaskalver have found a blend of all their individual parts to create some really good and memorable songs.
A pretty solid mix and production is an added bonus with vocals feeling powerful along with the instrumentation and not getting lost in the sound. A folkier Ensiferum? Or a less intense Eluveitie? Nothing wrong with being compared to either one, a great 2nd album from Svaskalver and another quality release from a St. Petersburg band.