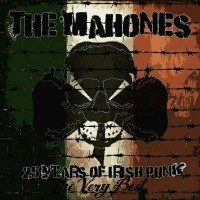 Starting in 1990, The Mahones are playing Irish Punk for 25 years now, and they’re doing a hell of a job. Starting in small pubs, but now they headlining festivals as well. They have grown and grown over the years and have ripened as a good whiskey. The last albums in their discography are very nice ones for sure. Their love for the Irish culture and their great affection for punk makes them what they are now. One of the greatest bands in their genre.
They re-recorded lots of their nicest songs, and they have created quite a few over the past 25 years, and put them together on this album. This doesn’t only make this a collection of their finest songs, but this makes the whole album very coherent. Awesome to hear all their greatest hits played by the current line-up.
The toughest nut to crack for a folk-punk band is the sound on a studio album. This kind of music sounds the best played live. Mission for the band and producer is laying down this nice live-sound on a studio album and The Mahones couldn’t have done a better job with ’25 Years of Irish Punk’. It’s just like watching them on stage, this album simply has a perfect ‘live-sound’.
Never thought a best of album could be so much fun!!!