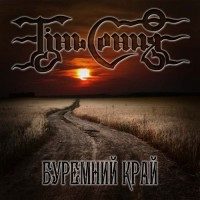 Tin’ Sontsya has surprised us with a new album ‘Romko Zhyvyy’, an album with which we get more Ukraine folk-rock like we’re used to by these guys. This album sounds a bit heavier in some spots, but don’t expect full blown folk-metal. The clean male vocals sing in their own Ukraine language. This means I can’t understand any of their lyrics, but when you dive a bit deeper into this band, it’s obvious they’re very proud of their country. So, it could easily be expected some of the lyrics are about that. At least the last song of this album ‘Zrodylysʹ my velykoyi hodyny’, this is their national hymn, a song we can hear more often by Ukraine bands, which is no wonder, regarding the events in their country the last years.
Not only, the vocals are clean, but the solid guitar-work is as well. But both guitars are the foundation for the solid sound of Tin’ Sontsya.
The overall feel of this album is more of a solid rock one, but it breaths the wind of the Carpathian mountains, so the folk is there for sure.

Pretty nice album, when you don’t like all the harsh grunts and violent noises of some bands, but you like your folk to be solid.