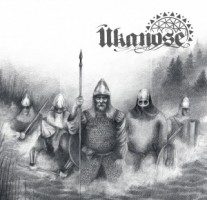 We have had some pretty decent releases come in from Lithuania recently (Romuvos and Juodvarnis come to mind) but none that were super folky…. more Viking/pagan if anything. The seeming debut from Ūkanose is probably the folkiest I have heard come out of Lithuania and is still not over the top with the folk but still has it more than others from there. This 6 piece from Vilnius have put together 9 tracks on their debut album, 1 previously released track (“Trijų Seselių” from 2014) and 1 cover track (“Gerkime” by Corvus Corax) with 7 additional original tracks totaling approximately 43 minutes. I have had a hard time trying to connect them or compare them to another band out there…. you would think having an accordion as the main folk instrument would make it easy to compare to someone like Korpiklaani or Eikthyrnir amongst others but they don’t really sound like anyone else I can think of. Most of the tracks are mid paced and have a straight forward/power metal vibe to them and have a smooth vocal delivery. There are some more up tempo parts in some of the tracks where they cut loose a little bit but most of the songs have a “reserved” way about them, not wild or out of control but very methodical. I really like the more subdued tracks (“Ūkanose”, the beginning of “Skrenc Bitela”) as it shows they can really build the mood and weave a tale. Some may find this a little “sleepy”, tracks are pretty similar in style and tonality but I think it is pretty solid if not super diverse. The production is on par and the mix is appropriate for their style and sound. While not quite as heavy as some other exports from Lithuania, Ūkanose offer a nice debut with strong musicianship and decent songs and a very accessible sound… good album