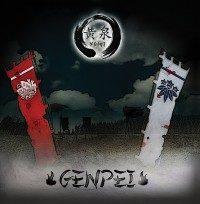 From the land of Skyforger, Latvian Yomi releases its second full album. The bands are somewhat comparable in sound and feel. The distinguishing difference is the use of traditional Japanese folk instruments like Jew’s harp, Shakuhachi and Shamisen.

Since the debut album ‘Age of the Gods’ the band has improved on several levels. The production is better and there is more variation between the songs which makes the album more interesting. Apart from that, it’s a bit of a struggle to really love the album. For starters, the tempo is still mostly moderate. If you listen to ‘Yoritomo’s Legacy’ and go straight to next song ‘Battle of Kurikara’ you get the feeling that the songs are entirely the same. Even the melody of the folk instruments hardly differ. And there is more. The guitars follow the folk instruments all over the album. That makes the songs less interesting to listen to. Is that laziness? I don’t know. Furthermore the vocals are the same in every song. Somewhat doomy growls. On the same note most of the time.

Next song ‘All is void’ opens promising with a little clean choir singing. Truth be told, it does stand out a bit. But again, mid tempo. Finally on ‘Burning of Rokuhara’ the speed goes up. The growls and folk instruments still do the same thing. The bass faithfully following everything the folk instruments do.

The oriental approach in itself is interesting. It’s just not presented in a very interesting way. Finnish band Whispered show how that can be done. I am not suggesting to copy and paste what they do, but Yomi might learn a thing or two in the how-to-market-my-band department.