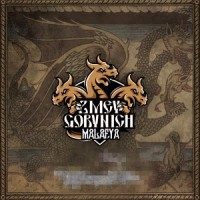 First things first, kudos to Zmey Gorynich for releasing an EP in a year, which while still epic, was sorely lacking in EP’s. After hearing the EP I can understand why it is an EP as this turbo charged release would kill mortal men if this was an entire album. There are 8 tracks here of amphetamine laced folk metal to give Trollfest and Rogatiy Kolokol a run for their money. Two of the tracks (“Морозобой” and “Ой, Лёли-Лёли”) have been released previously as singles so we have an intro, 3 new songs, a cover and remix of “Ой, Лёли-Лёли” in addition to those. This Moscow based troupe don’t shy away from any style and tries to shoe horn all different types and genres into this release. While I wouldn’t classify this as “swamp metal” since it is more diverse than that, the bands besides the aforementioned ones to come to mind were Svartby, Finntroll and Trollgasm, they certainly have a lot in common with these acts especially because of the speed thing. They dabble in a little folk metal, a little nu metal, a little death metal, a little doom, yeah a little of everything for sure. The songs are as catchy as they are fast and they end as soon as they begin so don’t blink. Clocking in at around 28 minutes, I guess it is longer than it seems since everything song is like an avalanche of sound. I don’t want to make it seem this is all about the superfast tempos as there is some great musicianship here but it can get lost in the vortex they have created. Super folky with accordion(?) keys and some wind instruments with everything in between…even some female vocals. I would liken Zmey Gorynich to folk metal Dr. Frankensteins trying to throw multiple parts together to make the monster and it certainly works with a decent amount of success. As much as I like to say “the faster, the better” a slower number or two would make the fast ones stand out more so. This mad hodgepodge of styles and speed is a must for all of those who think “Brumlesbassen” isn’t fast enough anymore, hey there is even a “hip hop” version of “Ой, Лёли-Лёли” to close this out.
I have listened to this a dozen times and it is a great EP and has they have a bright future ahead with some tight songs with an equally good mix and production. Now I need to go drink a pot of coffee and drive the bullet train to listen to this again… see you in 28 minutes.