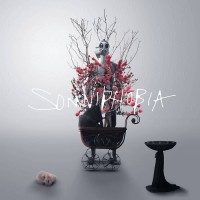 Most people think folk metal in itself is a bit odd. On the one hand you’ve got nice melodies and traditional instruments and on the other hand you’ve got brutal voices, distorted guitars and relentless drums. For people who think folk metal isn’t odd at all, there are bands like Alux. These two Mexican combine a lot of musical styles. Some metal, some not. The use of symphonic instruments dominates their style. That is to say, one of their styles, because not all the songs have the same feel. The band (or project) use the tern Sympholk to describe themselves. That’s not far off the mark, albeit that they are capable of more than symphonic folk metal.
An EP then with 4 songs. Actually 3, but with two versions of title track ‘Somniphobia’. In this 5 ½ minutes song there is a lot going on. Bombastic parts with rather low unclean vocals, little choirs, quieter parts, nice riffing. If the song would be 2 minutes longer I would be tempted to call it epic. Think Fairyland with grunts and you’ve got a reasonable picture of the sound.
‘Get the thief’ is quite a different matter. It’s much more light-footed and has Trollfest written all over it. It’s fast, it’s fun. Remove the tables and chairs and starting acting like madmen.
Finally instrumental song ‘Mirrors’, again a totally different song. What kind of atmosphere is Alux trying to achieve? The bombast is there again. Some classical influences, crashing cymbals, simple keyboard melodies, disturbed radio sounds. Somehow it doesn’t add up to a song. And that kind of goes for the entire EP. Every part in itself is okay to sometimes even pretty good, but the cohesion is hard to find. I wonder whether that’s because the band likes to play all kind of styles and don’t care what the rest of the world thinks. Or because the band tries out different styles in order to find out what the fans like best. The end result is an EP with nice songs, but not one that many people will like as a whole. So, rather difficult to rate and interesting to hear where the band goes from here.