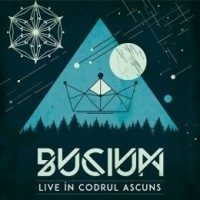 Two violins together with guitar, bass, drums, traditional instruments and vocals are the basis of the Ambient Folk-Rock of the Romian band Bucium. Not a band which gives you an overload of releases. A demo in 2002, their album ‘Voievozii’ in 2008 and now this album ‘Live în Codrul Ascuns’.
they have played lot of concerts over the years and this can be heard on this album. It’s sounds very balanced and the songs are ripened over the years and they stick to their very souls over the years. The band suffered a tragic loss last year when their drummer died in the Club Colectiv incident, while helping victims.
And it seems to me, this event sounds in their music as well, the sadness about this loss and the warm feelings for their brother in arms, is deeply rooted in the way they sound.
When you like your folk with fierce vocals, raging guitars and pounding drums, you can skip Bucium. But when you’re in for clean vocals, fine musicianship, and folk-rock, which sounds a bit more solid sometimes like in songs as ‘Razboieni’, you should give them a try. They’re even very rarely expanding to folk-metal like in ‘Greuceanu’, but even in their songs there’s a bit of everything, soft and louder pieces are tastefully arranged. And the band is using the traditional Dacian sounds a lot like in ‘Colindu’ Cerbului’, so there’s enough nice stuff for the folk-fan.

This is an album with carefully composed songs, really nice stuff. But when you like it all to be quite solid, you’re not knocking on the right door, let alone if you like it to be raw and unpolished. But that’s the only downside of this album, the songs are nice, with lots of changes in it, played with passion in a skilled way. So, if you like that, give Bucium a try, it’s surely worth it.