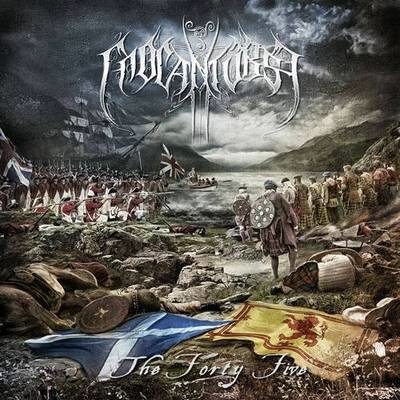 I have made it abundantly clear over the years (hopefully) of my love of Scotland and Scottish metal. With acts as diverse as Saor, Fuath, Alestorm and Adabroc amongst others, the land of my forefathers is rich with folk, pagan and black metal. Of course, this list also includes Cnoc An Tursa from Falkirk who released their epic debut “The Giants Of Auld” in 2013 and are poised for another new album in 2017. The sophomore album is titled “The Forty-Five” and continues with their history lesson of dark chapters in Scottish history. Specifically, this album is based on the uprising against England which ended with the defeat of the Scottish highlanders at Culloden Moor is 1746 (which they touched on with the track “Culloden Moor” on “The Giants Of Auld”). While this may be too specific for some of you in regards to a concept album, the tracks do not crush you with the concept which gives it, I believe, a wider appeal. Stylistically, Cnoc An Tursa could best be described (at least to me) as a more pagan/black metal version of Saor to an extent or Winterfylleth or Skalmold are probably better comparison wise. While still very similar stylistically to “The Giants….”, Cnoc An Tursa have started writing tracks that are longer and have more interlude parts which creates that much more mood. Yes, the tracks are still as heavy as ever but they are more interesting listens with added orchestration, keys and instrumentation throughout. There is a total of 8 tracks….2 being instrumentals (Intro “Will Ye No Come Back Again” and “Flora MacDonald”) and the other 6 tracks averaging around 7 minutes in length so definitely quality over quantity. The maturity and confidence in their songwriting I think will be evident if you listen to both of the albums back to back as the new album has more layers to it then “The Giants….”. The guitar harmonies are still a huge part of their sound and are now augmented with keys at various spots throughout the album. The blast beats and haunting vocals are still omnipresent as well. “Sound The Pibroch” might the most straightforward track here but it is still almost 7 minutes long so now you get the brutalness with the added bonus of twice as long as prior tracks. If you are a fan of “The Giants Of Auld” you will definitely love what they have done here with the same ferocity and stronger songs. The overall recording is strong as well and has more a nice smooth sound, balancing the heaviness with the added instruments, choral vocals and arrangements. It is not even 2017 yet and I could definitely see “The Forty Five” ending up on my top listens for the new year. Cnoc An Tursa have come back in a big way with their sophomore effort with one you should put on your list of albums to acquire in the new year.