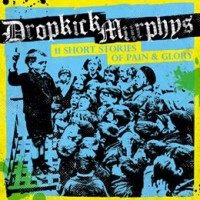 It has been a while since we got to hear something new from the Dropkick Murphys, but here it is ’11 Short Stories Of Pain & Glory’. The band has written their name in concrete all over the world. with their punk-background they found their very own spot amongst the first class folk-punk bands.
And this album has this strong punk-attitude again, but they didn’t forget the folk as well. ’11 Short Stories Of Pain & Glory’ might be even be one of their folkiest albums.
The songs reflect the bands experiences, sadness, anger and dismay. The song “Rebels With A Cause” was written about kids who are given up on, and left behind by a system that has written them off as hopeless. “Paying My Way” is about the way up and out of addiction and the dream of bigger and better things in life.
“4-15-13” stands out as one of the most emotional pieces in the group’s catalog. The track pays homage to the victims of the Boston Marathon Bombing, most of whom the band grew to know personally after visits to their hospital rooms in the aftermath.
The band is very engaged and they live up to it. The band doesn’t only care, but is actually involved in helping all kinds of people who are on the edge of being crashed by society.
And it is this very involvement which can be heard all over this album. The songs are drenched in the harshness of society. They have covered the lyrical side to their music perfectly. The music is maybe even better. This album sounds fresh like a new punk-band, but it’s mixed and mastered with the experience of many years on the road.
A great achievement by these guys from Boston. A perfect album which will please their fans for sure and will add a lot of new fans to their gang as well.