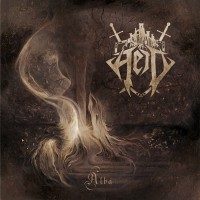 I have been waiting a long time for this debut album by Spain’s Heid and I can definitely say it was worth the wait. After thoroughly enjoying their last release (2014 EP “Voces De La Tierra Dormida’-“Voices From The Sleeping Land”) an album was looming in the near future thanks to a successful crowdfunding campaign.
“Alba” is the title for this opus and contains a total of 10 tracks totalling almost 50 minutes and I believe all new tracks. Heid blend history and folklore into their tracks without it being too much of a school lesson while musically they balance a line between pagan, thrash, folk and black metal. Two bands that came to mind while listening were the mighty Windfaerer and the equally epic Helsott, violin driven pagan metal (and other folk instruments)with thrashy overtones reminiscent of classic Testament. I think if you have heard the tracks released so far (“Arde La Rebelion”, “Rumbo Al Sur” and “El Traidor”) you already know this troupe can lay it down but that is only one small part of the Heid sound from those tracks. While violin is the most prevalent and easiest to pick out folk instrument there is also mouth harp, whistles, duzaina (Spanish oboe) plus acoustic guitar mixed into the tracks as well giving it much more dimension with each passing track. A nice couple of instrumentals are mixed in as well (album intro “Trista Esta La Rey”, “Bosque De Nubies” and “El Buey”) but don’t think of these as filler but more transitional pieces that help to propel the whole story of the album along. There is also a wide range of tracks lengths to please every listener, shorter (3-5 minutes) and a couple of longer ones including the mega epic almost 11 minute album closer “Carmino Sombrio”. Vocally, the death/black metal style is employed for most of the album with some choral backing style on a few tracks. This album has just a nice balance between fast/midpaced, folky/black, anthems/smashing and heavy/acoustic that I am sure any listener will find multiple parts of “Alba” to enjoy. The overall sound of the album is nice and solid, heavy for the heavy parts and when solo instruments like the violin or acoustic guitar are featured, they sound natural and lively. The song writing is probably the biggest highlight of the album for me with superb arrangements and smart choices with tempos, riffs and lyrics. It would be easy to have some of these songs become overdone quickly and Heid show restraint and maturity in not pouring in on too much but giving you enough to want more. While it is possibly too late in the year to strongly consider this as a top album of the year contender, I just may have to carry this over into 2017 to give it a fair shake.
A great debut album well worth a listen, I guess it is an early Christmas present for you folksters out there…..