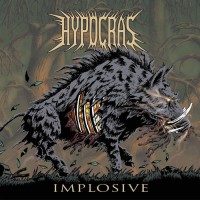 From the land of Eluveitie, the 5 men band Hypocras releases its second EP. With a full album in between Hypocras is not the most productive band in the scene, knowing that the band was formed in 2005. For a change this is no cross over material. No black, pagan, death or other influences. This is just the band for your site.

Running just over a quarter of an hour each of the 4 songs better be good. Especially considering the fact that the fourth track is a remix of one of the other songs. But we’ll come to that in a minute. First up ‘Implosive absolution’. Within half a minute you hear everything you can expect from the band. That being harsh vocals, melodic riffing and solos, nice bass and drums backing and a very good production. Oh, and I forgot to mention the flute. In fact, there’s a full time member for this classical folk metal instrument. The flute melodies are somewhat melancholic. At some points it adds a little extra to the song. On other occasions it’s a bit ‘well, we’ve got a flute player, let’s give him something to do’. On ‘Implosive absolution’, that may be considered the title track, it works well, giving a little rest to the otherwise pounding rhythm.

‘At the edge’ is an example of the flute being introduced to avoid the flute player getting bored. The other instruments carry the song easily. Enough speed variation, melodies you can remember, just plain good song writing. The song is just over 3 minutes of playing time. In this case, that’s not a bad thing. It’s not always necessary to put 10.000 ideas in one song. So again, a nice enough song.

Last proper song ‘A song for them’ starts like a bit more of the same. Interesting melodies, guitars far in the forefront, the flute is there. Then after two minutes, the bass and drums ask for some attention. A break, moderate speed, time to soften up. Only to reach a blasting finale and bang your head once more. Once again, good song writing.

And then, my friends, the band tries to be funny. Track number four is a remix of ‘At the edge’. Or, as the band calls it: a fucked up Ibiza Vikings remix. Odin, Thor and Tyr would not be amused. Loki would, perhaps. It’s a dance mix of an otherwise okay song. I suppose an EP with just 11 minutes of good music wasn’t enough. Solution: rape the original song and count on metal heads to be drunk enough when you play this remix. This would not be my choice. A band like Axxis could get away with it, because it is close to their standard repertoire. Not so with Hypocras. Stick to folk metal, please. It may not be overly original, but it’s performed on a high standard. You don’t need this silliness.