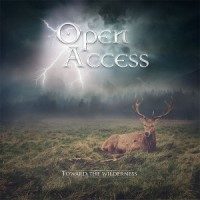 The Polish Folk-metallers of Open Access made their debut with an EP called ‘Over a Mountain Peek’ in 2015. The band had already some line-up changes in the past, but they added two more in between this previous release and their first full length ‘Toward the Wilderness’. They have Michal on drums now, and he does a fine job at this position. And there are of course good, bad and very good drummers, but changes on this very important position in the band are not often recognised by most of the listeners (sorry drummers). The second change the band has experienced was they have Malwina taking care of the vocals nowadays. But I have to be honest, I didn’t hear this at once. After diving in their recent past I noticed this change, and when I compared the two released I could hear this change indeed. Compliments to the band to find a replacement on this position which doesn’t influence the music too much. With her just as light and theatrical vocals she creates this nice sound which forms the foundation of Open Access: clean theatrical female vocals, solid guitars and nice violin.
Just like the previous piece of work, this album ‘Toward the Wilderness’ is mainly sung in English, there an exception ‘though: ‘Płomień życia’, sung in their native language Polish. At this is in my opinion one of the better tracks of this album. I’m always slightly more interested when bands use their own native folk and they can use their native language as well, as far as I’m concerned. There some more power in Malwina’s vocals in this track and it all seems to flow more naturally. And if I don’t understand what their singing… who cares!
But there are very nice tracks in English as well, ‘Divided Water’s Tide’ is one for example, musically a very nice track, nice guitar-pieces give you the illusion of flowing water, the vocals seem to be very inspired by Tarja.
The violin is nice overall, playing folky stuff as in ‘In the Moonlight’ but more classical in other tracks and sometimes just as a back up for the rest, Ola seems to know what she’s doing, great stuff.

‘Toward the Wilderness’ is a very nice album. Open Access stayed on the tracks they were moving on all ready, and this is good news. Despite the fact hasn’t invented a new sound, they have a distinctive sound of their own. And not only that, but it’s a sound I like to hear more in the future.