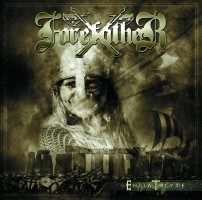 In what has become an annual tradition, the mighty Heidens Hart has re-issued yet another of Forefather’s killer albums, this time around it is the 2002 epic “Engla Tocyme”
(“The Coming Of The English”). Following the success of the first two reissues (“Deep Into Time” and “The Fighting Man”) there is no reason to think that this would be anything other than another gem.
This (just like all of their other albums) could be released right now and be on any top 10 list for sure. “Engla Tocyme” I believe is their shortest album in their discography, 7 tracks totaling just under 40 minutes. The quantity of tracks and time don’t really mean much when you are smothered by epicness and of course, Forefather always delivers. However, as a bonus, HH have included the single “Loyalty Bound” which previously had only appeared on a compilation. I am still amazed at how instantly recognizable their sound is……the tone and riff style, the vocal delivery, the lyric phrasing, the tempos, all unique and authentic. If forced too, I would maybe compare them to some of the Mithotyn material or Falkenbach but I feel they are not 100% accurate. To lump them in with “Viking metal” acts is probably everyone’s tendency and I guess on some level they are even though they prefer “Anglo-Saxon metal” which seems more appropriate. If you are addicted to FF last album (“Curse Of The Cwelled”) as much as I am then you need to jump on this re-issue especially to add that single to your collection. The tracks for the most part are mid-tempo based on this one than I believe a lot of the others but that doesn’t create any sort of disappointment but rather just shows how diverse they are. I don’t know if there are a huge amount of differences in this reissue from a recording/mix point of view, I tried to A/B my original version and thought they sounded pretty similar so sonically I don’t see any major changes.
From the NWOBHM wave to newer extreme metal acts like Winterfylleth, Forefather is the act that has bridged the divide from the origins to the future and still do it just about better than anyone else, another glorious release from Heidens Hart.