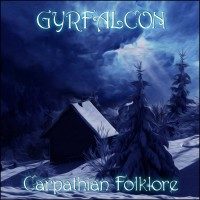 Gyrfalcon is a one man project from Ukraine they’re described as psychedelic folk rock on their bandcamp page and I’d say it’s a pretty apt description. Carpathian Folklore is comprised of just four songs but clocks in at around an hour of music. Three of which are around 20 mins. The songs are all mainly instrumental, three of which are new and one from a previous record. On their bandcamp it states that this is just a taste of what they do and that there is more coming so I’m thinking this could be considered an Ep. Musically the tracks are haunting and atmospheric. For a one man project I felt that there is a definite mastery of all the attempted ideas and themes. The music itself is a journey and well worth listening to. There is a kind of shamanic/native American tribal tone to all of it. Im not sure if that’s intended or not just my impression. I felt the music was akin to Panopticon in sound although there were parts with bagpipes too so Carpathian Folklore is not really aping anything in fact I’d be hard put to compare to many other bands. It’s definitely mood music, very chilling and ambient. While ambitious though, I feel like the tracks are just too long. They’re well done musically speaking but it’s pretty daunting to listen to a 20 minute track. And the structures of the songs really felt like they’d have benefited from vocals. The final bonus track reinforced this feeling for me as it did have vocals and while it wasn’t the most groundbreaking I thought it fit rather nicely. In fact the bonus track was easily my favorite it seemed to showcase more instruments like banjo which complimented the western feel the rest of the album had. It just seemed like even though the songs had a lot too them they were kind of rushed. Being on their page it shows their two albums came out within a month of each other, so maybe it’s the case that he just had a few more ideas that he wanted put out. But compared to the last song the 40 minutes before felt slightly incomplete.
It was good for some nice background ambient music and I’d listen to them again but I hope that maybe the songs are a little shorter or split up into separate parts. Carpathian Folklore was good overall but a little long winded for me.