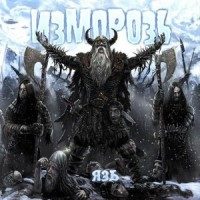 How often is it that you find a band that has now 8 full lengths and a couple of EP’s to their credit and you have never heard of them? Well, if you are an Izmoroz fan, then shame on me for not being in the know as far as how killer they are. Formed in 2006, this Russian based crew has been churning out albums almost every year and I am now catching up on their older stuff thanks to the web. Their latest release “Язь” continues in steamrolling along on every track which is what seems to be there forte, face smashing semi-folk metal. If they have been compared to a less swampy Svartby or Rogatiy Kolokol I think that is pretty fair or a less quirky Trollfest……maybe a black metal/folk combination of some kind? There is definitely a blend of styles here and I guess every individual will have some take on which genre combination works best. I think what I hear is primarily thrash/black metal tracks with folk instrumentation sprinkled in which works well indeed. The 10 tracks here are relatively short (mostly 2-3 minutes) so I think you know you are going to get crushed with speed and obliterated with every passing track. In comparison to their other albums, this definitely seems to be more “to the point” than ever with no time wasting in each track. Folk instruments range from what I perceive to be flute, clarinet, accordion, acoustic guitar and some piano mixed in for good measure. I suppose the debate on whether this could be an EP will raise it’s ugly head again…..this is an album in my opinion and super solid and another jewel in their discography.
The mix and production are a lot meatier than some of the other albums I had a chance to listen to with a thicker overall guitar sound and a more cohesive vibe. This is a nice boggy album and one that all of you speed demons out there should run and grab immediately, while you are at it get the whole discography and start from the debut. Another great album from Izmoroz.