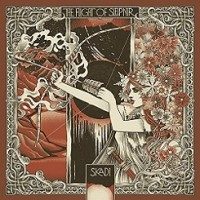 If you are waiting to go on a mind-altering adventure, then please do so with The Flight Of Sleipnir as your guide. These Colorado USA natives have just issued their 6th full length album in 10 years with “Skadi” for their new label Eisenwald. Not familiar with TFOS? Well, they are one of the more indescribable bands I can think of. With a sound based I would say in progressive rock and psychedelic doom with a touch of black and Viking metal, TFOS have carved a place in time and space that no one enters. Imagine Cream, old Grand Magus, Candlemass and Electric Wizard jamming on blackened Viking themed epics and you might be in the same forest. If you had a chance to experience their last album (“V”) then I think you will notice some subtle differences with the new album. First off, there are only 5 tracks here totaling 45 minutes (as opposed to 7 totaling almost an hour with “V”) which should indicate that the tracks are longer this time around averaging 9 minutes. Most notably, I feel they are less proggy/psychedelic on this album being more straightforward with doom tinged metal and having a little more of a “jam” band feel. The two founders of TFOS (David Csicsely and Clayton Cushman) have seemingly shored up a recording lineup with the addition of Dave Borrusch on bass and Justin Siegler on guitar (as a note all 4 of them played together in black metal act Archeronian Dirge since broken up) I think with Dave and Justin’s addition, the “jam” feel seems more evident and maybe the need to augment their style with the electronica in the studio is not as necessary. There is some subtle “Hammond organ” keyboards in “Earthen Shroud” that will give you that retro vibe as well as some wah guitar and other little throwbacks sounds throughout. The folkiest you will get is maybe some strings in “Voices” but that is about it. The tracks are as brooding and monolithic as ever from opener “Awaken” being the gateway to far realms. What is a hallmark of every track is the variation from quiet passages into gnashing and abrasive stretches which can be somewhat unnerving but helps create a very interesting listen. The building anticipation is one of the reasons I enjoy listening to them the most, just waiting for the hammer to drop at any point is riveting. I would say the overall sound tends to be a little rawer than anything else they’ve done previously. The production also has a more stripped down feel as well with less distance in between the listener and the music, there is a very lively feel to it with punchy bass and a nice distinct drum sound while being enveloped in varied guitar tones and hell born shrieks.
While I would not say “Skadi” is a sequel to “V” I would certainly say they have used it as a springboard and have jumped into a slightly different direction albeit still very based in what they have done previously. Still no one sounds like them and as far as I can tell, no one will anytime soon. Another epic album from TFOS…

The Flight of Sleipnir