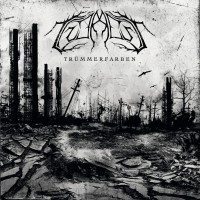 After years of dormancy, Germany’s Thormesis returned with their epic album “Freier Wille-Freier Geist” in 2015 which highlighted their unique style of black/pagan metal. Now they are ushering in 2017 with their follow up “Trümmerfarben” and picking up right where they left off and have produced an album equally crushing.
There is a total of 9 tracks here totaling almost 49 minutes of music so plenty of new tunes to delve into. There is the obligatory intro (“Aetas Nova”) and an outro (“Vale”) so 7 tracks sandwiched in between. One of the most memorable parts of Thormesis is the riffing which I feel doesn’t really have deep roots in black or pagan metal but in other styles such as progressive and thrash. Once layered with bass, drums and vocals, the riffs become much heavier with everything together but still having loads of melody. For example, “Waheelas Fährte” has a nice cross section of interludes, tempos and styles in its 8 minutes (also being the longest track on the album) I think if you could take some of the best parts of Kreator, Enslaved, Voivod and older Borknagar you would have some pretty favorable comparisons to what Thormesis sounds like. There are a lot of nice surprises here, the beautiful guitar harmonies in “Die Klagen der Einöde”, the groove laid down in “Verblasst” and the numerous slower parts juxtaposed with the blast beats and heavier material. All in all, Thormesis is not a “one trick pony” by any means with tracks that are not so easy to guess where they are going and taking some chances while still remaining true to their sound and style. I would say this is pretty accessible for a black/pagan metal album and they definitely have a unique style to pick them out of the crowd.
Production and mix are solid and heavy with a nice edge all around. “Trümmerfarben” is another great album from this German horde and makes for a great 2nd act in their return from hibernation.