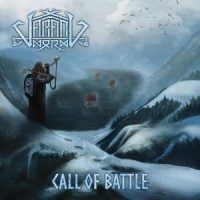 The members of Varang Nord must have read my mind when I thought that 2016 was very thin in EP releases and decided to drop a new 3 song EP entitled “Call Of Battle”. I have had the honor of reviewing their last 2 releases (EP “Fire Of The North” from 2014 and full length “Master Of The Forest” from 2016). With each passing release, they get better and this one is the same case, 3 instant classic tracks and their best release so far. As I had stated in my previous reviews it was just a matter of time until they severed the ties to their previous existence as Balaguri and changed to Varang Nord and now I feel the departure is complete. This Latvian horde have put together almost 15 minutes of new music here and while it is relatively short, it packs a mighty punch. The first thing to call attention to is the fact that I would call them Viking metal for the most part….however the omnipresent accordion gives them a unique sound. I guess I would like to think if Amon Amarth borrowed Nathan from Eikthyrnir or Sami from Korpiklaani you could get into the Varang Nord sound but there are still some other style differences. They are not so death metal based but more power or traditional metal based I think, well whatever they are they just keep getting better and better. EP opener “Call Of Battle” has a nice slow build to it before getting into the meat of the song with a brooding way about it before marching into some nice blast beats and choral vocals and at over 6 minutes is the longest song in their catalog now. 2nd track “Ale Brewer” and sadly last track “Northmen” I think are on par with what they have done previously and are also strong tracks. Just when you blink, it is over, and then you hit repeat.
After years of dormancy they have caught fire and I would imagine a full length is coming in 2017 at some point. 2016 is basically over now and 2017 lies on the horizon, what a great ushering in of the new year with a solid EP from Varang Nord.