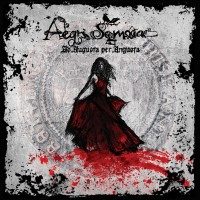 I will admit quite candidly that this album baffled me at first….and then 2nd and 3rd and then I finally got it. I am certainly glad I stuck with it as I have listened to numerous times now and it gets better with each successive listen. Aegri Somnia ( I would translate as a “nightmare”) is a 2 piece act from Spain featuring Cristina on female vocals and various folk instruments and Nightmarer on guitars, bass, programming and male vocals. On their debut album “Ad Augusta Per Angusta” (“Through Difficulties To Honors”) they have taken folk music to another place which I think will have a major crossover effect.
Mixing in elements of black metal, traditional and electronic music, Aegri Somnia have cultivated a different approach to the music of their ancestors. If I had to mix a few bands together to describe them, I would say Birds Way, Dead Can Dance, Ad Plenitatem Lunae and Thy Worshiper were probably a few bands I could hear elements of in their sound but these are very simplistic comparisons. Everything on this album is very sparse from a listening perspective….Cristina’s vocals and Nightmarer’s guitar being the primary instruments in most tracks. However, some tracks will have key arrangements and numerous folk instruments so you will get caught a little off guard with not knowing what is coming next. Another interesting aspect of “Ad Augusta…” is that the basis for the tracks are late 19th and early 20th century Iberian folk songs which if you were told that, you may think they would have an altogether different sound. However, they don’t take it in the “flamenco” direction or the overtly Spanish sound/style and have made it more appealing if not as linear a listening experience. If you remember classic Celtic Frost, then you may be familiar with the track “Tristezas De La Luna” (“Sorrows Of The Moon”) and I think that one track could be the closest thing I could compare to Aegri Somnia style. Because of the programming in some cases you could almost say “industrial” on a couple of tracks.
The tracks were recorded over a 5-year span so that could explain why there is such a diverse style of tracks on here. The mix and overall recording has an old sound to it which lends itself to the authenticity of the entire album…..it doesn’t have an overly digitized or overworked sound but sounds very home grown. Give this album a few serious listens and it will grow on you like it has on me….. an interesting take on folk music with a nice inclusion of various styles to make it interesting for every listener.