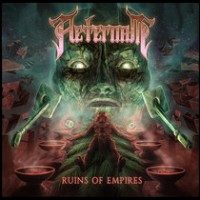 ‘Ruins of Empires’ is Aeternam’s third full length record since forming in 2007. The band themselves hail from Canada and lean heavily towards a middle eastern influence in the same vein as Melechesh and Orphaned Land. It’s really well put together and it easily keeps your attention, the inclusion of choirs and an assortment of Middle Eastern instruments I personally am not familiar with play a big part in that. Aeternam’s particular brand of metal is a mix of Melo-Death and a touch of power metal. All these different elements meld together nicely to form more of symphonic death metal kind of sound.
‘Ruins of Empires’ as a whole has a very epic feel to it kicking it all of with choir infused war march that opts for more of an Arabian sound than the Scandinavian Viking battles we are accustomed to at this site. Instead Aeternam steep their lyrics and sound with Babylonian and Abrahamic lore, and some Greek mythos as well. Its an interesting change of pace for what I usually consider folk metal. But whether it qualifies as that doesn’t change that it’s a heavy hitting and interesting metal album, drawing on influences from all across the metal spectrum.
As far as the music itself goes production on ‘Ruins of Empires’ is top notch, everything is perfectly clear deftly executed and at most times completely epic. Its pretty impressive work seeing as Aeternam is currently operating as a three piece band. There are quite a few guest appearances mostly choir and an array of orchestral and Mideastern instruments. All complimenting a solid backbone of Melodic Death metal that ranges from thrashy to straight old school death metal riffing.
There’s a lot to chew on musically from all aspects and I have already listened to it quite a few times myself. There are quite a few clean singing pieces but they had more of a power metal approach to them and fit pretty well I actually liked quite a bit of it. Like I said definitely a solid piece of work if not the folkiest out there, then again that’s probably a regional perspective, either way definitely an interesting take on the themes as far as epicness and sound quality and worth quite a few listens in my book.