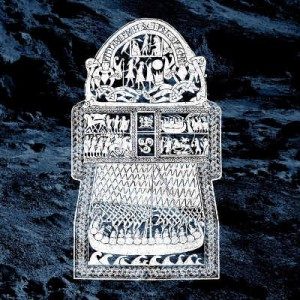 I recently put together a short list of my “most looking forward to” releases of 2017 and Arstidir Lifsins was definitely on it. After the release of the monumental “Aldafǫðr Ok Munka Dróttinn” in 2015 and becoming one of my top albums from that year, I was eagerly anticipating the next chapter and it has arrived in the form of a 2 track EP entitled “Heljarkviða”. Most would think that 2 tracks does not an EP make, but when each track is 20 minutes in length then EP seems appropriate. If you are not familiar with them, Arstidir Lifsins is comprised of musicians from Wöljager, Helrunar, Kerbenok and Carpe Noctem amongst other acts so an international conglomeration of German and Icelandic members. Trying to wrap your head around a genre for them is tough as they have numerous styles in their arsenal….folk, black metal, ambient, pagan, instrumental……too many to choose from but they all have their place. Just as they have done in the past recordings, they have used Old Norse literature, poetry and mythology as a basis for their tracks here. Without giving too much away, they have used some pretty dark chapters for these two tracks and it certainly has a bleak vibe from the opening seconds. First track “Heljarkviða I: À Helvegi” has moments of beautiful instrumentation and impending black doom with both spoken and vocalized lyrics plus a “hallmark” of their style….for lack of a better expression “dark choral chanting” throughout that really gives it an even darker feel. I would think if anyone wanted to hear a blacker/heavier version of Wardruna, they should be lining up for Arstidir Lifsins. Track 2 “Heljarkviða II: Helgrindr Brotnar” continues the story and may be even darker than the opening track with layers of dissonant guitar, strings and vocals like an entire mountain falling on you. Much like “Aldafǫðr…..” this is not one of those releases I think you will be grabbing and listening to daily as it is so overwhelming to the senses and surpasses the normal listening experience. However, the energy from just a listen or two will stay with you long afterwards. I would almost consider this a soundtrack on some level given the length and style but the heaviness will reel you back into black metal territory. The word “unique” tends to get overused but that seems fitting here as I can’t think of anyone who combines the number of elements that Artidir Lifsins does seamlessly. The production and mix are on point and it needs to be to have this be successful. While 2016 was sorely lacking in EP’s, 2017 has been ushered in with one of the best of the year already with “Heljarkviða”. I can’t say that everyone will get into this like I have as it is not a “just throw it on” sort of release……it pulls you in and requires your utmost attention. Another incredible release from Arstidir Lifsins.