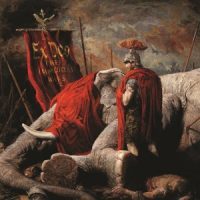 I was just as surprised as anyone when I heard that Ex Deo was breaking up in 2014 only to announce their return a year later and with a new album coming. The new album “The Immortal Wars” is their 3rd full length and is equally as potent as the anything they have put out previously and is now my favorite of them. I would think you all know that this is a “side project” of sorts (4 of the 5 main members are in death metal legends Kataklysm) and luckily is not just cast off songs but a full-fledged entity. I think most of us appreciate that they have taken a different route in the genre and not done the Viking thing, opting for tracks sounding the glory and history of ancient Rome.
This album I guess would be considered a “concept album” on some level (aren’t all of their albums?) with the main focus being the Punic wars (2nd to be exact), most notably the battles with Hannibal and his ultimate defeat and the decline of Carthage. I know that Ancient Rites have dabbled in the ancient Rome subject matter but I don’t think as identifiably so as Ex Deo. With full on Roman style armor, shields and artwork, they have definitely committed to the concept. The album is relatively short track wise (7 tracks plus 1 instrumental) and length wise (38 minutes) but I think Ex Deo benefits from not overdoing it here and keeping it to the point. Stylistically I guess symphonic death/progresssive metal works for me with accented keyboard/orchestral parts highlighting mid paced and some up-tempo death metal tracks. Opening track “The Rise Of Hannibal” sets up the rest of the album powerfully (and thankfully they didn’t have an instrumental as opener). The tracks just seem to be more memorable to me for some reason….whether the riffs are catchier or hookier I am not sure but they just seem to be easier to wrap your head around and get into. The main riff of “Ad Victoriam” could be riff of the year, simple and crushing. This album is very “visual” to me as I can really see the songs, not in a literal sense but they are definitely giving me the feeling of the story taking place. The orchestrations by Ardek (of Carach Angren) most notably in interlude “Suavetaurilia” and in almost every track help paint the backdrop and give this a very cinematic/soundtrack feel….hence the “visual” thing for me. He really captures the Cornu (arc shaped brass instrument), lyre, lute and various other “Roman” style instruments, at least that is what they sound like to me. By all means replace your soundtracks for “Gladiator” and “Ben Hur” with this album and you won’t be disappointed at all. The blending of the tracks into each other makes this seems like one long epic track but there are separations so it is not too much to take in. Major props for the amazing mix and production, full of fury with pounding drums and bass, chugging guitar and vocals of all sorts that sound like titans.
Well I guess “retiring” was a good idea as Ex Deo has made the best album of their career and a major contender for everyone’s album of the year list I would think