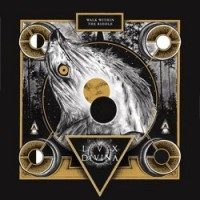 Spain’s Lux Divina have returned with a new album entitled “Walk Within The Riddle” and what an appropriate title for an album that is truly enigmatic (at least for me). I will explain shortly. But first, it has been 4 years or so since their last full length album (2013’s “Possessed By Telluric Feelings”) which I would say was pretty decent. Categorically, I have for years been hearing them called black metal and I think that tag is way too minimalistic in terms of what they bring to the table, especially on this new album. Imagine a mix of Queensryche and Agalloch with newer Mayhem, Paradise Lost and Borknagar and I think you may have some idea….and yes I know this blend of acts seems unbelievable. Maybe you can understand why “black metal” is too simple a genre. The new album features 7 tracks totaling around 48 minutes or so (although I believe there is an 8th track entitled “Nature About God” on other versions) Musically they have stayed within the pagan/dark folk style but jump out into other genres from time to time by either changing the tempo or the riff style. Vocally, Norax switches between a “traditional” metal vocal similar to Geoff Tate (thus the Queensryche comparison) and a dark/black metal vocal which helps build the mood. Besides the instrumental “Machiajolo” the tracks average over 7 minutes in length which is nice but I think a shorter track or two would be nice. “The Long Fingers Of The Willow” is my favorite track on here and is also the shortest at just under 6 minutes. I would say overall this album seems more “progressive” than the others which isn’t a bad thing but it seems more polished then earlier material and may not have the edge that you have come to expect from them. Don’t get me wrong …..this is still a heavy album and has blast beats and all of the other things. I am just saying it has a refinement to it that makes it feel not as heavy. I would like to think the comparison to what Enslaved has done over the years is the most favorable one……starting with a more primal style and then growing into another one relatively organically. The production is smooth and hits the mark for a strong mix but it also seems pretty “safe” in terms of the overall heaviness as well. This is a decent album (although there isn’t any folk on it to speak of) and I think if you are into a little doom, a little black metal and a little progressive metal you will dig what Lux Divina is trying to accomplish in crossing into multiple genres and doing all pretty well.