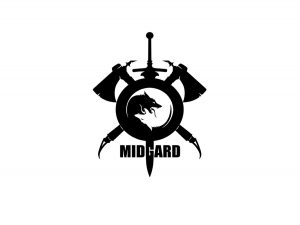 It is not often that we stumble across a one man band in our scene. In black metal it’s not so unusual, but in folk metal it is. And that’s what Midgard is. One man playing all the instruments and doing all the vocals. That in itself is worth a listen. Ukrainian Fion Miller is Midgard. No ifs or buts, he is the drummer, flutist and everything in between. In my eyes, that’s quite a gamble. Can he be good enough on every instrument? One thing is for sure, this is not bad at all.
Starter ‘Berserk’ is a fine example what to expect. The melodies, own language, aforementioned flutes, it’s all there. If there is such a thing as standard folk metal, here it is. Harsh vocals most of the way. Enough variation in speed in most songs. And enough changes between the songs. Hardly anything not to like. Or is there? Well, some of us hate keyboards and these are sometimes rather prominent in the mix. Others want their metal so raw that the vocals cannot be understood. Hearing clean singing on Hero, in the English language as well, may put them off. Not me, I am easy going. I think keeping things trve restricts a band unnecessary.
The again, after a while it shows that Midgard is a one man band. Fion masters all of his instruments and therefore deserves our endless respect. But he doesn’t excel in any of them. And where the song writing is good, it’s far from original. You’ve heard it all before. And towards the end of the album, the song writing becomes a bit less interesting. After ‘Warlock’ the last two songs feel a bit like fillers. Again: not bad at all. But not great either. For lovers of standard folk metal: don’t hesitate and give the man a try. If you’re looking for anything new: keep looking.