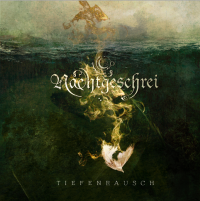 Nachtgeschrei is back with their fifth full length album. This one is called ‘Tiefenrausch’. And while they’re still moving between the borders of folk-rock and Medieval rock with bits of metal, there’s changed something as well. They have matured…. The music has developed to a profound style, but this album really stands out by it’s lyrics. The songs are about deeper feelings and all kinds of states of mind.
The album starts with the title-track ‘Tiefenrausch’ which we already knew from their latest video, a catchy track which shows exactly what you can expect from Nachtgeschrei these days. The music leans a bit to more to Medieval rock, the bagpipes, hurdy-gurdy and whistles have all much better embedded in the music. The goldsmith has put it all together with delicate accuracy, inspiring the poet to integrate his inner feelings to the songs.
Nachtgeschrei had already claimed a spot in the German Medieval rock scene, but with this album they can take a step forward, the songs are more intriguing then ever and the band has takes itself to a next level with this album.