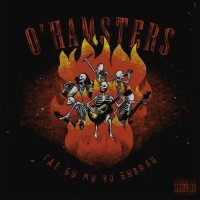 Ukraine Folk-punk band O’Hamsters released their third album called ‘Gde by my ni byvali’. Into Celtic Punk? Up for something new, or do you know them already? Doesn’t matter, get your ass to Bandcamp and order this album. You can pay, whatever you want! What would you want more? Nothing, absolutely nothing.
O’Hamster have proven their selves again. 14 tracks filled with high energy Celtic Punk song, no Ukraine influences here, pure Celtic punk, with fiddle and all you like about this music. Of course they don’t sing in English, but who cares. Drink a few stouts and you won’t notice.
When you visit the Carpathian mountains someday, go and take a look, the Emerald Isle seem to lie somewhere down there as well. Istinnyy Irlandets would have been a terrific albumtitle as well. A True Irishman, that’s really how this album sounds!
If you’re in for about a whole album of speedy energetic folk-punk, don’t miss out on the O’Hamsters.