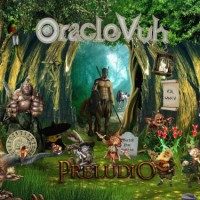 OracleVuh, folk-metal hailing from Guatemala, yeah, you heard that right, Guatemala. Not one of those countries we hear from a lot. But coming from the great Mayan culture, they have a lot of history to bring into their music. This Mayan culture is the major topic in their lyrics, that’s great for a start.
The music has nice Mayan influences as well. And I’m not an expert on Mayan folklore, but it seems to me there are Spanish folk-influences too.
And I can tell you this sounds very nice, the flute, violin and the additional keys give it all a very nice folky taste in their own style. Sounds great, and it is.
What bothers me in their music a bit are the sometimes hysterical proggy keys and the not always nice sounding vocals. Missing some notes here and there and a bit nagging sometimes. This is a shame, because the music is very nice indeed.
I have no doubt ‘Mudo Perdido’ is my favourite track of this album, although the proggy keys at the end of the song, ruin it a little.
This is a first album for this band and this can be heard in the production a bit. Sometimes the guitars sound very muted for instance when other instrument are brought to the front.
Oraclevuh sounds very promising, the metal-foundation under the music is nice and solid. The folk elements are delicious. Of course there’s room for improvement, but when Oraclevuh manages to fix these, they will have an awesome sound.