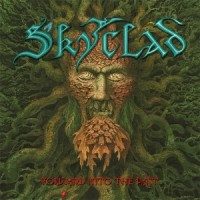 Folks not dead, not at all, and neither is Skyclad. The band started way back in 1990 and is considered one of the very first folk-metal bands. Their first release was in 1991 already and not many bands in this genre can say that. They always had a unique style, with clean singing, fiddles and Irish folk integrated in their music. Which creates this unique sound
which tends towards the sound of the Celtic punk bands in a some songs.
The band welcomed Dave Pugh back in the band which brings the line-up of the band back to their early years for a huge part. It’s seems to make the band more alive then ever and this album never feels like a forced re-start of a band which has been away too long. No, they’re alive and kicking and the album-title says it all ‘Forward into the Past’. Skyclad is moving on and sounds like we’re used to. Of course they’re not with their original singer any more, but Kevin does a fine job as well, maybe a tiny bit less a metal voice, but this doesn’t effect the songs in a bad way at all.
The band is still into social issues and politics a lot as shown in songs like ‘State of the Union Now’, this is another link they have with a lot of Celtic Punk bands. But when you listen to songs like ‘The Queen of the Moors’, you know what I mean. The Irish folk-feel, the folky fiddling of their own queen Georgina, makes songs like this are the missing links between the folk-metal and Celtic Punk.
The songs are as strong as ever, if it weren’t for all the big hits they have created in the future, the tracklist of this album could as well be the set-list of their next gig.

Skyclad is back with a very, very nice new album ‘Forward Into the Past’, a collector’s item!