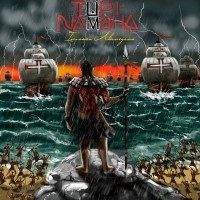 There is not a lot of info out there regarding the debut album from Tupi Nambha or really the band itself. This act from Brazil has put together 7 tracks totaling 28 minutes or so on their debut album entitled “Invasão Alienigena” (I will say this is “Alien Invasion”). Whether or not this is “folk metal” will be immediately up for debate as there is not a lot of folk instrumentation on it that I can hear. Sure, the album starts with what I would say is didgeridoo before getting into the tracks and there may be some interesting percussive parts and acoustic guitar on here. For the most part I would have a hard time classifying this is as “folk metal’ but more like just metal with some folk instruments here and there. Vocally, it took me a while to figure out what they reminded me of and then it hit me…..Phil Rind from Sacred Reich (80’s thrash band from Arizone USA) and even musically I would say I am reminded of some old thrash on some level….maybe even country mates Sepultura? Possibly on some level but if maybe Tupi Nambha had followed what Sepultura did on “Roots” and “pushed the envelope” so to speak and incorporated more of the Brazilian folk music/tribal rhythms I think it would be much more successful. One item of interest is that they are singing in a native tongue known as “Tupi Antigo” so the possibilities are there if they can match musically with what they are doing vocally. The tracks average about 3-4 minutes in length and are decent and have a nice catchiness and punch to them. I was hoping for something a little more traditional or folky but alas, not this album. A fun listen and some good points but there is definitely room for growth.