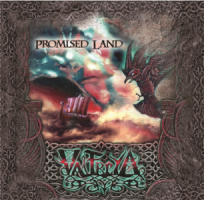 2016 was a great year for folk metal there were so many awesome records were released it was difficult for me to come up with just 10 of best, just out of the sheer volume of remarkable records. We are only into February and in my opinion 2017 may just top last year with top tier releases. Montreal Quebec’s Valfreya hasn’t released an album since 2013’s Acoustic Chronicles and their last metal album 2012’s Path to Eternity didn’t get rave reviews on this site. This year they return with Promised Land. Rather than a return to form however, Promised Land is a complete revitalization of their sound. Heavily focusing on the symphonic side of their symphonic metal genre, every song sounds crafted as if for a film score. And on par with many of most enjoyable soundtracks out there. Everything is more epic and grandiose comparing it to their last efforts everythings been fine tuned and easily enjoyable from start to finish.Frontwoman Crook in my opinion delivers one of the strongest female vocal performances that you’ll likely hear in extreme metal period, displaying nice range whether singing harsh or clean. The latter of which isn’t largely employed except for some choir/chanting parts that really add to atmosphere of the orchestral aspects of the music. The guitarists and drummer, respectively provide vocals also so theres a pretty nice vocal assault through all the songs. The songs all have their own pace find a unique stride from very folky romps that resemble at times Arkona, to film score worthy Symphonic parts. The guitar work has a nice thrashy neoclassical feel with riffs fast that at times are almost solos all through the songs. Definitely never boring, but thats not to say they dont know when to slow down rather than a relentless pace there are lots of moments when the strings and folk elements get to shine, building up to some pretty epic moments.
Their themes of Norse mythology and vikings remain largely intact, and touches of folk metal can be heard all throughout the songs but they have more of a death metal leaning to their sound. If you missed Path to Eternity or it just wasn’t your cup of tea, give Promised Land and another because the band have really come back with something special here and you’ll find something to like with each listen.