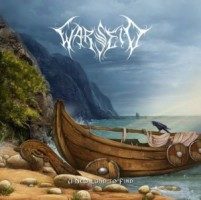 The new album from Wisconsin USA’s Warseid has been one I have been heavily anticipating on numerous levels. Why you may ask? First, it is their debut full length which seem hard to believe since I would have sworn they had a full length out already…I guess the epic EP’s released previously by them had me in a daze. Secondly it has been almost 5 years since anything new has been released….2012’s “Where Fate Lies Unbound” was the last release in a 4 song EP format. They were recently signed to the mighty Soundage Productions home to some of my favs like Winterhymn, Voloh, Equinox, Troll Bends Fir, Abracadabra and numerous others. Lastly and most importantly, there have been some major lineup changes as I always thought of them as a 5 or 6 piece and now are a trio. Bassist Kyle Cushman has now added vocalist to his repertoire with drummer Kellan Hilscher holding down the fort with guitarist Steve Hoff. So, are they still the same group? In some regards they are and in some they are not. Sonically, they are still I guess I would say Symphonic Death/Folk Metal akin to Vesperia, Aether Realm and Wilderun. The song lengths are still on par with previous efforts (5-8 minutes in length) on this 7-track album (6 plus instrumental intro) Whether these songs could be pulled off in a live setting remains to be seen since there is a lot going on for 3 piece. Guitar harmonies, layered vocals and keyboard arrangements are all on display to create a sound much larger than 3 members possibly could create but I would love to see them try. In a worst-case scenario with just the 3 of them playing, you would definitely get pummeled with musicianship and whirlwind tempo changes plus an avalanche of riffage. I think they are most successful juxtaposing the faster parts and slower parts to create the drama needed to make both interesting. In “When The Ravens Are Fed” and “The Winds Sang Of Death” as examples the faster stuff will crush you and then when they put the brakes on, you can take a quick breath before you get thrown back into the tides. “Between The Shadows” and album closer “Damnation And It’s Hold” starts off nice and serene before the battle ensues. Admittedly I had a little bit of a tough time getting into this at first as it is a little overwhelming a listen with so much going on but with repeated listens it becomes more comprehensible. Maybe it is the track length? A shorter track or two mixed in would I think help carry the longer ones along and show a little diversity in what they do…..yes I am nitpicking. The mix was also a little difficult for me to get into at first. There is just so much activity and I found things fighting for space, especially any key arrangements seemed to be somewhat crammed in but again after a few listens it seemed to make sense and work. I would say the one word that came to mind when listening was “ambitious” as I feel they have gone above and beyond anything they have done previously with half the people. Using the cliché “less is more” seems appropriate…..it worked for Duskmourn and definitely works for Warseid here on their debut. Hold on to your hats when you listen to this one as you will definitely be put in the crossfire. An amazing debut from these fire breathers and another strong debut of the year contender.