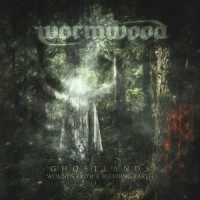 As I have stated previously, I am always surprised at some of the music we receive at the site for review. Seeing as how I may be the resident black metal expert then the new debut album by Sweden’s Wormwood was destined to fall into my lap.
This 5 piece from Stockholm have one other release under their belt (2015’s EP “The Void: Stories From The Whispering Well”) which I had heard and thought was decent but not super memorable. I would say a change in focus and direction was needed and they have certainly altered their trajectory and crushed it with this one. “Ghostlands….” Is 12 tracks of skull crushing (yet accessible) black metal and at just under an hour, has plenty to offer. I think they have gotten away to an extent from the “black and roll” thing and committed more to being straightforward melodic black metal and that was the right thing to do in my opinion. There is still some of those catchy black and roll riffs mixed in but the more epic riffs and song styles far outweigh them for sure. First single and video “Godless Serenade” may actually be the only song on here that doesn’t jump out as much for me and that track is killer so you know the rest of the album must be too.
I wouldn’t say there is tons of folk metal here but as the album moves along the tracks start to show more folky touches. “Silverdimmans Återsken” and “Tidh Ok Ödhe” plus a few others have enough folk instrumentation and female vocals for the whole album so no worries. Who do they remind me of? Månegarm mixed with Dissection, Taake, SIG:AR:TYR and Finntroll is a potent blend and I think Wormwood could be connected to all of them on some level. They also seem to have done what few bands can do successfully…..tracks in both English and their native tongue (as a note I usually always prefer native tongue to English if both area available) Wormwood seemingly do both with ease and doesn’t sound like one outshines the other. Average track length is about 5 minutes which is perfect for their style as they mix mid tempo and blast beats along the way.
Vocals are “standard” black metal style from Nine but have more power and conviction than most with some spoken word thrown in for good measure. I really haven’t found much I don’t like about this album and I would have never guessed this was the same band from “The Void….” to now as they have really stepped it up. The mix and production are full and give it an extra punch, thick with drums, bass and chainsaw guitars.
If you had told me Wormwood had released a debut album a few weeks ago, I may have dismissed it as more of the same from them but I couldn’t be more wrong. A huge surprise and a killer debut album.