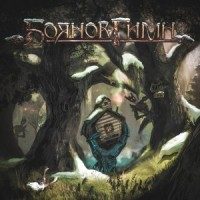 With the new Boyanov Gimn album ‘Zimnie Sny’ out, I wonder, what causes growth in a band. Boyanov Gimn has made a substantial growth with this album. Important changes in the line-up? Nope, this seems not the case. The only big change they made since their previous album seem to be the fact the’ve signed with SoundAge Productions. This wouldn’t be of
major influence to their songs. So, I draw the conclusion, they have ‘simply’ grown a lot.
Despite the songs aren’t all as folky as I would like them to be, ‘Dvoye’ for instance is one of a number of songs with trumpets, which usually don’t enhance the folk-feel. But what’s more important the songs have much more tension compared with most of the tracks of their previous album.
Songs like ‘Konya na Skaku’ make up for this lack of folk, because this is more a metal folk-song in stead of metal with folk-influences. But what’s very nice about this album, is that these variety of songs, seem to glue together. They have all this distinctive style and that makes it’s a very nice whole. At the end of the album, I can even forgive them for the trumpet-sound in some of the songs.

Boyanov Gimn has takes a big step forward with this album, they find themselves in between a large number of bands at SoundAge Productions, which seem to the ‘home of folk-metal’ these days. I was surprised by the step the band had taken, so I’m going to enjoy this album some more and muse about what their next album would sound like.