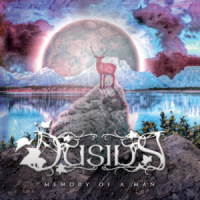 Italy’s Dusius is an impressive seven piece specializing in a nice blend of Viking/Celtic folk metal. They started in 2010 and outside a demo this is the first full length and it’s a really nice debut. I’d say their music is a mix of a lot of different ranges of folk metal. Their use of hurdy gurdy and bagpipes give them a sound that lays somewhere between Eluveitie and Koorpiklaani. I found myself making those comparisons quite a lot through quite a few of the songs. They are well put together and offer a lot on their merit. Any fan of the aforementioned acts will find themselves right at home here. Couple those folk metal elements with a duelling guitar type of metal backbone and you get an idea of what to expect. Dusius’s songs all have nice layering to them bringing a lot to take in on each listen and the songs segue nicely into each other, giving the album a theme feel to it. Most of the songs don’t the five minute mark so they never feel too repetitive in themselves although throughout you’ll hear some of the same musical themes return adding to the overall story being told. My personal favorite parts were the dual guitar parts that really kept the Viking metal aspect in the forefront. For me the only actual negative for me were some of the clean spoken parts. There’s not a whole lot of them by the end but I think sometimes they were a little dramatic with the delivery of them. It’s not necessarily going to take away from the album’s overall greatness, because otherwise quite good, I just felt their harsh vocals and clean Viking chant parts really outshined the spoken word. Still a very nice debut and I’ll be very interested in what they do in the future.