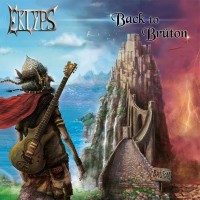 Not an overly productive bunch these French ensemble. In almost 20 years, only one full album has been released, along several demo’s and one earlier EP. In the end of 2016 ‘Back to Bruton’ saw the light of day. Five songs, each between about 4 and 6 minutes long. Fairly uncommon is the fact that all songs are sung in English. Maybe would have been nice to hear some French vocals, among all the Eastern European language in the scene. The folky feel is within the melodies and the violin. Vocals are clean, primarily female with an occasional male joining in.

Not the most brutal of folk metal you have ever heard. In fact, one could call it rock rather than metal. What characterizes the sound is the combination of violin and female vocals. You may call it melancholic, or sad, or mournful. To me, it sounds rather tired, to be honest. If you bring a song called ‘The Trolls Waltz’, I would expect fun, tongue in cheek, madness and relentless speed. Instead we get a mid-tempo, rather sad sounding song. I am sure there is a market for everything, and there are enough good points to give the band their own following. The bass, for example, gets enough space to be noticed, the song writing isn’t half bad. But somehow it doesn’t grab me. Apart from the sadness, that’s because of the lack of variety on the EP. It’s all more or less the same speed. The violin is constantly there. Again, it’s not badly performed, but there are hardly any surprises or USP’s to keep my attention. And when a band takes 6 years to make this EP, I wonder if there is enough room to grow.