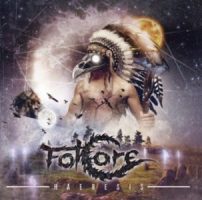 It seem almost 24/7 SoundAge Productions at the moment. This Russian label has taken a lot of Russian bands under their wings over the past years, but not only Russian bands, there are a lot of bands of the surrounding countries as well, and lately they even signed American bands. But this album ‘Haeresis’ is from a Belarus band called Folcore.
You’ll will probably think Folk Core? What the Hell! At least that was what I thought at once. But it made me curious as well, bands like Niburta and Krampus show there are different ways to implement Folk into metal. Folcore proves ones again, folk isn’t dead, no not even close: FOLK IS MORE ALIVE THEN EVER!
These Belarus people did a hell of a job with this album ‘Haeresis’. The metal sounds modern and fresh, with a lot of core in it. Very nice male metal vocals, but as a counterbalance, just as nice female folk vocals. Very, very nice guitars, bass and drums, laying down a very nice tracks of our own time spiced with Pavel’s voice, but all kinds of wind instruments by Vladimir and the folk vocals of Elvira, give this album a nice historical sound as well. Never forced, always sounding natural.
Is there no downside on this album? Sure there is, it’s way to short. A full length album with only a bit over half an hour of music, is way to short in my opinion. And it’s mean as well, to torture the listener with silence after only 7 delicious tracks.
We want more!