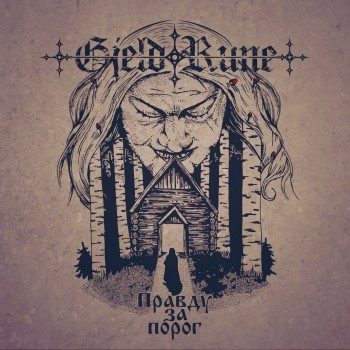 Russia’s Gjeldrune have just released their 2nd full length entitled “Pravda Za Porog” (which translates to something along the lines of “The Truth Is Not Welcome”) on their new label Der Schwarze Tod. Their last official release (2015’s “V Parusah Cveta Zari” (“The Colors Of The Sails Of Dawn”)) was a nice collection of newer tracks, remakes and covers but I was anxiously awaiting a new full length and thankfully it doesn’t disappoint. On this 2nd full length, I think they are developing more of their own sound with a mix of some accessible and some heavier material blended together on this collection of 10 tracks. Totaling around 43 minutes they have once again had their music finely mixed and mastered by Sergey Lazar (guitarist for Arkona and mixer for such acts as Beer Bear, Equinox, Alkonost and many others) The tracks are what I would call quintessential Russian folk metal with flute being the primary folk instrument with acoustic guitar and keyboards augmenting and creating other folk instruments. In comparison to some other Russian folk metal acts (especially the wild ones from Saint Petersburg), Gjeldrune have a very easy to get into sound, even after a listen or two. I would never say this is commercial but it definitely is not as heavy as others. Track lengths are 3-5 minutes which works with their style as they don’t have that 10-20-minute-long track style sound to me. I would think you could find them pretty predictable but they definitely mix it up, primarily changing what instrument is defining the riff more….whether it is guitar, bass, keys ,flute or some combination of some or all….it really does keep you on your toes. At the end of the day, it still all sounds like Gjeldrune so that shows how tight they are. Tempo wise they never go super-fast but some up tempo parts are here and there with some nice slower tracks that build the mood. There is also a nice use of various vocal styles from the death/black metal type to tenor to group vocals and they don’t smother you but pick the right spots for the right type. My favorite highlights are when the flute and keys merge together and drive the tracks like “Khort” and “Novyy Mir”. Is this the heaviest thing you will hear? Definitely not but it doesn’t try to be anything other than a solid, folk metal album with a diverse selection of track styles but all with their trademark sound. A superb second full length from Gjeldrune and an album which will certainly propel them forward as one of the premier acts in the Russian folk metal scene.