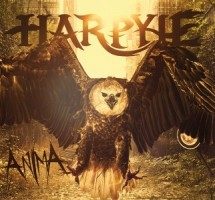 Harpyie is back with another release, their three previous albums were OK, but not more then that. I’ve passed the ‘curious’ state when I’m going to listen to their new piece ‘Anima’, but I couldn’t have been more wrong. Finally, finally, finally Harpyie has taken the step into the big world. This new album takes of with the interesting title-track ‘Anima’, spoken words about the oppression of religion, nice music building up, nice violin and towards the end an epic orchestral sound. Wow, this makes me curious, could Harpyie really have grown this much?
‘Ambra’ is nice, but can’t completely turn me over. But they do with ‘Schneeblind’, the nice orchestrations do the trick. And the progression the band made can be heard well in ‘Flieg’, seems like a song in the style we’re used by this German band, a bit like Vogelfrey, but this song is so much better then we’re used too. The band sounds mature, the music has balls and it can keep your attention.
The band can keep up with the promise the made when they stated ‘Anima’ is their most mature album.
The lyrical theme of the album ‘Anima’ is the observation of humans through the eyes of animals. I can’t say I would have said the same by only listening to this album, it’s obvious animals play a big part in their stories, but my German isn’t good enough too hear these finesses. But it could be a nice add-on for the people who do speak German very well.

At the point I thought I knew Harpyie, they managed to take a big leap forward and delivered a very nice album. The band displays a mature sound, with fine music. This album sounds more epic, has a lot more tension, compared with its precursors, and can keep your attention all the way. My compliment to Harpyie for this nice surprise.