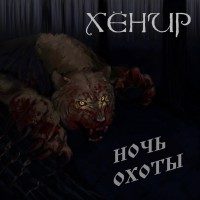 As you may have noticed these days a lot of your favourite music comes from Russia. It’s not all brilliant, but there is so much of it out there, that now and again we are pleasantly surprised. What then, do we know about Hoenir? Not overly much, has to be said. We do know that this is their first single. Let’s give it a spin.
Production: good. Metal: there. Speed: yessir. Okay, enough reasons to listen to the three songs. Starting with the title track after a little mid-tempo start, the party gets on the way. Vocals between harsh folk and pagan. The words are understandable, but only if you know Russian. It’s fast without becoming messy. It’s accessible without becoming cheesy. There are enough folk elements to keep us all happy. Mostly accordion and I suspect keyboards to create a nice full sound. Third song Кровная Месть starts off furiously and then turns into a rather more heavy metal song. But with the accordion again, so we are good.

Song writing is not half bad. We can add Hoenir to the growing horde of interesting Russian folk metal bands. In fact, who wants to organize a Paganfest entirely presenting Russian bands? You’ll have no problem at finding enough quality. Looking forward to their debut album.