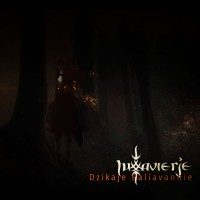 Yeah, I know Lutavierje released two singles in between, but it took them 4 years to release a brand new full length album. I quite liked their previous album ‘Piesni nalitych chmaraŭ’, was it worth the wait…?
‘Dzikaje Paliavannie’ (Wild Hunting) is a lot like their previous work. The metal is not too hars, no screams and stuff here. The metal part of the music is nice and decent, but the folk has a huge part in their music. Violin, bagpipes, flutes, they have it all. In the previous album a nice mix, although I would prefer it slightly heavier.
The clean mail vocals and the airy female vocals don’t give the music much weight. But this new album has a new thing which bothers me a bit, the vocals all have a space sound. I can’t tell if this is on purpose or if it’s due to the recording process. A fact is I don’t really like it.
The band has included their previous singles ‘Lileji’ and ‘Litva’ on this album as well, they fit very well in. This album has quite of lot of nice songs, but they have a rather fragile sound overall.
This sound makes I switch to something a bit louder after a few tracks, I sincerely hope the next album has a bit more power. Since the songs are so nice, I wouldn’t mind a if a lot of songs would be on their next album in a slighty ‘louder’ version.