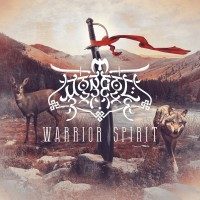 It seems that there are numerous bands influenced by Asian/Oriental styles when it comes to folk metal. The ones that come to mind for me are Nine Treasures, Tengger Cavalry, Yomi and others including Canada’s epic Mongol. It has been almost 3 years since their last album (2014’s crushing “Chosen By Tengri”) and they have returned with a 3 song EP coming out in April entitled “Warrior Spirit”.
While short in length (18 minutes or so) it packs quite a punch. What I appreciate about Mongol is the how they flow between their power metal style and blend of traditional Mongolian style. Most bands that include Asian traditional music tend to overwhelm the metal with the folk and not balance it out as much. Mongol push the power/epic metal primarily and then add in the folk instrumentation where needed (in this case what I would say are accordion, whistle, flute, mandolin and banjo). If the folk instruments were stripped away, you would still have killer tracks. I would say comparison wise I think Ex Deo on some level is pretty decent along with Finntroll and Helsott but the Mongolian influenced folk sound makes them pretty distinct. After listening to this back and forth between “Warrior Spirit” and “Chosen…..”, I think there were two big things I noticed. First, their overall sound has a rougher, more “in your face” edge to it from the music to the vocals and I would say it has to do with the mix and production being a little more forceful. Secondly, the song writing is catchier on these tracks with the riffs being a little more “groovy” or memorable to me, making the tracks more individualized. The three tracks (“The Mountain Weeps”, “River Child” and “Warband”) are all epic tracks and among the best in their discography and they are all on this EP. It is hard to believe that they hail from Canada and have such a connection to the sound of Mongolia but it looks like they have tapped into the right vein. The riffs are crunchy (along with the nice arpeggios and solos) and vocals are punchy at times and then turn into the death wind sweeping across the steppes. The tempos and rhythm never get too out of control and have a steady pulsating pace throughout with subtle keys. I would say they successfully use the banjo (a highly underrated instrument in folk metal) better than anyone else and I understand why…..banjo doesn’t necessarily work for most folk metal styles but it does for the Asian influenced tracks here perfectly…..especially if a sanxian isn’t handy (Chinese lute).
A killer EP and another step forward in the evolution of Mongol. While not a huge difference style wise, a couple of new twists have made it a super release and another epic release from the Mongol horde.