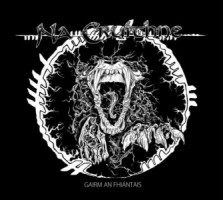 Ireland has a rich history of folk music and when it comes to the heavier folk/pagan metal stuff, of course bands like Cruachan, Primordial, Celtachor and Mael Mordha should come immediately to mind amongst others. I think there could be room for Na Cruithne in the conversation as well. Hailing from Galway (one of my favorite places in Ireland) they have created a sound and an album which is hard to connect to their countrymates, making them unique and distinct. Na Cruithne (which are an ancient people of Ireland by the way) are comprised of 6 members with a standard vocalist, bassist, guitarist and drummer augmented with folk instrumentalists playing fiddle, bouzouki, accordion (possibly?) or whistle. I would probably have to travel outside the emerald isle to maybe give you an artist that they remind me of…. maybe a folkier Skalmold or maybe an Irish equivalent to Trollgasm? No one really jumps out at me metal wise…. although a few Irish folk/punk bands here in the US maybe the closest for me. This is definitely folk metal with obvious touches of traditional folk and I think some black and thrash metal. There is a total of 7 tracks around 31 minutes so let the EP or an album debate begin. Most tracks average around 4 minutes with 2 (“Bultúr Marú” and “An Seabhac”) being both over 6 minutes and I think the shorter tracks have a little more impact for me. There is no lacking of folk instrumentation with an omnipresent fiddle throughout the tracks with touches of whistle (most notably in the beginning and throughout of “ReitheToghla”) I am presuming all of the track are sung in Irish with the two exception being two in English (“On The Ground” and “Parting Glass”) All in all a pretty solid debut album with catchy and heavier tracks than what I was expecting, even with a lot of folk instruments throughout. The mix and recording has a little bit of a rawness to it that helps add to the overall heaviness to it.
Definitely a nice introduction to Na Cruithne is what we have with “Gairm An Fhiantais” and I would absolutely say well met.