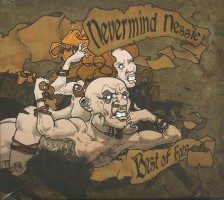 Belgium Folkpunk band Nevermind Nessie released their second album ‘Best of Foes’. The band released their debut-album in 2015 and we got thirsty again, or was is Nessie who drank all our beer?
Nevermind, we have something to drink on once again with this new album. The band has written whole new songs for this album, but they used some know melodies as well. The fans of Medieval rock will know the bear dance. But Nevermind Nessie has made a folkpunk version of the song, called Beer Dance, with lyrics this time, a nice one!
And we get some more, the famous Celtic ‘An Dro’ for instance, but all these melodies aren’t simply coveted, or imitated if you think that’s a better word. This kind of tracks are used often, but mostly in the same way. But Nevermind Nessie used them to create their own sngs, with their own lyrics. These lyrics aren’t always very smooth, the sentences seem a bit forced now and then.
The music is blended nicely like fine blended whisky. All instruments are nicely mixed and can be heard whenever they should. There quite some spotlight on the bass every now and then, but we saw that with their first album as well, since their bass-player plays these nice parts, he’s allowed to be a bit louder in the mix when he caresses his instrument. The thriving violin is delicious as well, it makes you run to th barfor another beer.

Again a very nice album by these Belgian Folk-punkers.