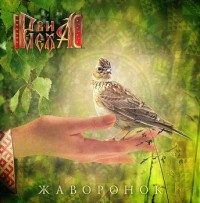 The SoundAge Productions fortress opens up it’s gates once again, and another folk-metal release is galloping through the gates into the world. Rvi Mehka, is a traditional Russian folk-metalband. The folk-elements in Rvi Mehka’s music take quite some space, the metal-instruments are responsible for the nice metal-layer under their music. Of course they contribute a bit more like the guitarsolo in ‘Letavitsa’, but even in this song eventually the accordion takes over.
The trademark of this band are the folk-elements, mainly taken care of by Vlad on the accordion and the traditional female folk vocals of Vasilisa like in ‘Za rechkoy, za bystroyu’. If it weren’t for the metal bedding, the song could have been played in a village 100 years ago.
And the band goes on like this on the whole album, but this doesn’t mean it gets boring at all. The songs are nice and diverse and they keep your attention all the way.