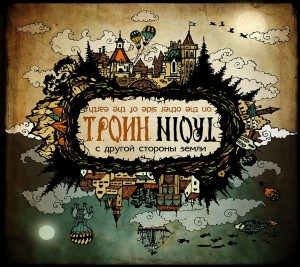 I like the Troin album from 2013 ‘Sobranie Izhecov’, and if it was for me, Troin had released this album ‘S drugoy Storony Zeml’ (On the Other Side of the Earth) two years earlier. But now it’s here, released at the mighty SoundAge Productions, which other label has this much folk-metal bands in store.
I guess the tag Tavern Folk-metal is quite an appropriate one. On their previous full length, they displayed this to the max, by using tavern sound in between the song on the whole album. Very nice idea, but you can’t dot this all the time, so you won’t find that on this album. Doesn’t matter they had made their point, it’s tavern folk-metal. This doesn’t mean they playing the alcohol drenched party mix we’re used to by some bands. No, not at all, but the songs have a high relationship with things which go in a tavern, bragging about your ‘Beard’ for instance. Spicing things up with ‘Horseradish’ and I can imagine what a ‘Burry Knight’ is up to in a tavern.
This all makes it’s tavern folk, but this doesn’t mean it’s all the same, no the band knows it’s way with music and this lyrical theme, you’re entertained every minute of this album. My favourite song of this album is ‘Piratskaja obydiennaja’, because this one is so nice and diverse, it displays all kind of elements, there’s a party in it, but I think the heavily toxicated start of the song is brilliant.
The band lards their music with nice authentic instrument, which enhances the folky feel even more. This all is done in a very nice production, all instruments can be heard clearly and all falls into place really good.

Troin made a very nice album with ‘S drugoy Storony Zeml’, I hope we don’t have to wait 4 years for a next album, I’m getting thirsty by waiting that long…