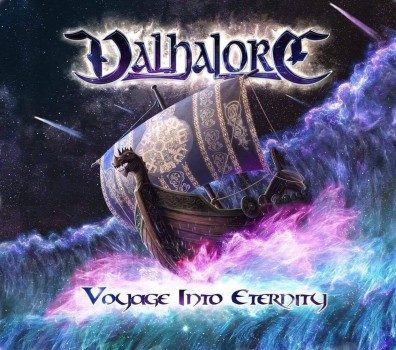 So, I always try to provide a little something different when I write a review and thought I would say what the worst parts of the debut album by Australia’s Valhalore are first. Since there aren’t any really bad things to say, I can move onto how truly epic this album is.
This 6-piece group from Brisbane have been gearing up for a proper full length and it has arrived in the form of the 10 tracks on “Voyage Of Eternity” (7 plus obligatory intro and 2 interlude tracks). For all of you discographers out there, all of their previously released tracks up to this point are on the new album….the two previously released singles (“Across The Frozen Ocean” and “Upon The Shores”) and all of the songs from the 2015 self-titled EP (“Malice Of Illusion”, “Augury Of Death” and the previously mentioned “Across…..”) With the recent (and hopefully not permanent) retiring of Trollgasm, Valhalore will be possibly supplanting them as my personal choice as the best folk metal band in the land down under. Their style is a mix of power metal, symphonic, death, folk and Viking metals combined into one wall of epicness. I think an obvious comparison would be a folkier Ensiferum with elements of Amon Amarth, Rhapsody Of Fire, Iron Maiden, Wintersun and Yonder Realm. After listening multiple times, I was drawn to the fact that the overall riffs style and song structure is relatively basic but what Valhalore does over top of the foundation is what is special here. They have an amazing ability to write and arrange as good as anyone out there. The layers of killer vocals (both death/folk style and power metal style) with the choir backing vocals and harmonized vocals is super killer. The interplay of folk instrumentation (primarily whistle and acoustic guitar) and keys/programming with the main electric instruments and percussion has so many things going on but all synchronous. The tracks have a wide range of lengths….from 2 to 7 minutes with more of the longer tracks being front loaded at the beginning of the album. The highlights for the album for me (and the there are numerous ones to choose from) are the two newer tracks (“The Winterstone” and “Guardians Of Time”) as they are not tracks I have heard previously. These probably show best where Valhalore are now and where they are headed….both amazing tracks.
There is nothing to not like about this album…. from killer vocals, shredding guitar (and some tasty solos and harmonies to boot) crushing percussion and bass, tight arrangements and a proper dosage of whistles and some other folk notes. I was more than impressed with the mix and production with a natural and blended sound to the vocals and whistle especially and enough attention to the guitar parts/harmonies. I found myself listening to 2 or 3 layers behind the primary action and all of it coming thru loud and clear. One look at the album cover and you should know what to expect….. a tidal wave of awesomeness and an instant addition to my debut album of the year list.