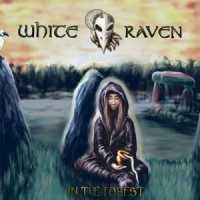 Spain’s White Raven have issued their debut album entitled “In The Forest” featuring a total of 12 tracks with a running time just over 46 minutes. I don’t believe they have any prior releases to this and having been in existence since 2011 it was a long time coming for an official release.

This 7 piece play I believe pretty straightforward folk metal with some death metal influences. I think a mix of Eluveitie, Winterhymn and maybe some Kanseil would be decent comparisons for me as far as their style and diversity. A major bonus to White Raven is that you get not one but two folk instruments throughout the album….whistles/woodwinds and violin. The two of them play off of each other throughout the track usually as the main riff, more or less. There are also some other folk instruments listed as being on here as well such as didgeridoo and mandolin but not on every track. The tracks average about 4 minutes in length or so including 4 instrumentals sprinkled throughout to help break up the tracks which may annoy some folks but I think it works. The overall style is mid-tempo with blasts of speed and a very staccato style guitar sound which reminded me a lot of classic Pantera. A few tracks also feature female vocals which I think was a good idea to also show a different side. By the time you finish listening you may think (which will seem a little strange) that there is almost too much folk instrumentation or that it is featured too prominently. I guess that is up to each individual but for me I think a little restraint would have made the fiddle and flute/whistle more impactful if they weren’t so omnipresent. I know it is a little nitpicky but I would like to maybe hear a little more guitar oriented tracks or at least maybe a little more in the forefront of the mix. Speaking of the mix and recording, overall a solid sound across the board but I would say the woodwinds/flute do sound a little detached at some points and with this many things going on there are time when things are a little cacophonous. At the end of the day, this is a super debut and I definitely felt the need to include a track on the podcast even before the review was issued. A great start for another killer export from Spain in White Raven.