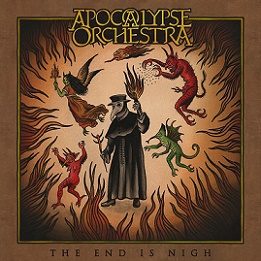 Sweden’s Apocalypse Orchestra is one of those bands that I have heard a lot of people talk about (especially my Swedish friends) but I was not really familiar with them. On their debut album “The End Is Nigh” I finally can see (and hear) what all of the buzz was surrounding them.
Featuring 8 tracks at just under an hour, “The End Is Nigh” will be released in May on Despotz Records (home of our friends in Grimner). If you have done some quick math, the tracks are above average in length (7-8 minutes) and feature a unique blend of styles namely folk, doom, medieval and I am sure a few others as well. I would probably take some offense to the doom label as they really are not too doomy to me…. however, the doom/nihilistic aspects of bands like Paradise Lost, My Dying Bride, Primordial and Amorphis are readily apparent in the Apocalypse Orchestra sound. I think the tempos are why they are lumped into the doom pile as they barely register as a pulse at some points. So, take that foundation and add some folk instruments (most notably bagpipe and a multitude of others) with both clean and dark vocals and choral backing vocals and you have a unique blend of multiple styles. My preference typically is for more up-tempo music but this one will really grab you and swallow you whole. The first four tracks were released previously as a 4 song EP in 2015 (“The Garden Of Earthly Delights”, “Exhale”, “Pyre” and “Flagellants’ Song”) so you are hearing presumably re-recorded versions of those along with 4 previously unreleased/newer tracks (“Theater Of War”, “The Great Mortality”, instrumental “To Embark” and “Here Be Monsters”). One thing about having the overall slower track speed is how carefully each note is selected and how the other parts augment them and AO does that with incredible thought to where they are heading. With each passing track you will become one with the rhythmic properties of this and breathe it all in. There is some major crossover appeal here from the folk to the doom and really just standard metal in general……a multitude of things to like. I would say the “theme” to the album is being on the verge of pending annihilation with their impending doom lyrics.
They have a very subtle progressiveness to their sound…check out the riffing behind the vocals in “Exhale” as one of many an example…..a weaving arpeggio guitar riff counterbalancing the vocal line. After numerous listens, I started think of them as “contemporary medieval metal” and yes, I am going to copyright that. They have a very “Gregorian chant” feel to them (without the chanting) but the overall feel is melding the electric instruments and drums with the classic folk instruments and a modern vocal style. Even with all of these various styles going on, the cohesiveness and direction is there and have solidified into a signature sound. The production is warm with a very lively percussion sound and understated guitar/bass attack with most attention being on the vocal and the folk instrumentation.
If you are looking for upbeat, this is not the place for you. However, for a nice introspective and thought provoking album “The End Is Nigh” is one I would recommend…..even me with my penchant for speed I couldn’t help but being sucked into this one….an amazing debut album.